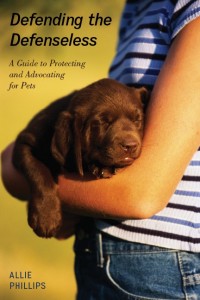 2012 Certificate of Excellence Winner from the Cat Writer’s Association!

Defending the Defenseless is a must-read for anyone who loves animals and wants to do more to help them live safely. This book is for anyone who wants to join a growing crusade to bring animal protection to its rightful place in a civilized society. Allie wrote Defending the Defenseless for three primary reasons: she knows a great deal about animal protection, she is frequently asked by others how they can get involved as well and there is not currently a lot of information out there on how to get involved with helping animals.

This book guides readers through the variety of ways they can help companion animals and offers practical tips to get involved, from donating money to volunteering at animal shelters, from opposing animal experimentation to raising children to protect animals. Phillips shares her own personal experiences in her work with protecting animals, which she describes as “some involve outrageous joy, and others involve life-altering devastation.”

Check out the Reviews! 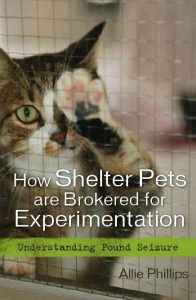 2011 Certificate of Excellence from the Cat Writer’s Association

How Shelter Pets Are Brokered for Experimentation exposes the little-known practice of shelters providing dogs and cats for experimentation. Many Americans are unaware of pound seizure (or pound release), yet it has existed since the 1940s. Although pound seizure is on the decline, there are still thousands of homeless, abused, neglected and former family pets victimized yearly by this practice. We are at a tipping point in the United States where animals are being understood as sentient creatures and the masses are opposing their use in experimentation.

If you have ever taken a stray cat or dog to a shelter, or called in a report of an animal being abused or neglected, it is possible that the animal was sent to a laboratory. If you live in one of the 33 states that allow pound seizure, or one of two states that mandate shelters to turn over cats and dogs to research facilities, can you be sure that your own pet will be safe if it runs away and ends up at your local animal shelter?

How Shelter Pets Are Brokered for Experimentation explains the inner workings of U.S.D.A. Class B dealers who broker cats and dogs from shelters to laboratories, including those under investigation for fraudulent and inhumane conduct. Voices of the research community, advocates working to stop pound seizure, and stories of tragedy and triumph are all featured in the book. Whether you want to become an advocate to ban pound seizure in your community or state, or simply care about animals, this book is a must read!

Check out the reviews!

National Institute Health pledges to phase out funding for Class B dealer dogs and cats in NIH-supported research (released March 2011 and February 2012) .