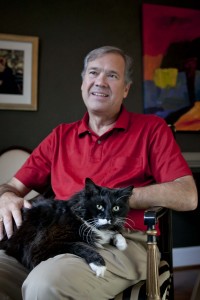 From Allie: Stemming from my blog on July 12th called We Can No Longer Remain Silent, this is the first guest blog in a series that will let you hear directly from experts in the field as to why animal abuse happens and ways that we all can get involved to prevent it and protect animals. Please share your thoughts and share with others!

The abuse of innocent animals is, unfortunately all too frequent and often horrific. And it’s easy for us to explain it by saying that perpetrators are “sick” or “crazy.” While this is undoubtedly true for some, a psychopathological explanation that focuses only on the characteristics of individual abusers really doesn’t help us to fully understand why most people harm other animals.

Why not? First, such an approach causes us to be concerned with only the most extreme cases of abuse, leading us to stereotype offenders as sadistic monsters, while ignoring others who don’t fit the stereotype.  It also creates an “us vs. them” mentality, making it easier to believe it’s only “those people” who commit such heinous acts. Second, saying someone abused an animal because he was sick doesn’t really explain anything – it’s a circular argument: “Why did he set the cat on fire?” He’s crazy.” “How do you know?” “He set the cat on fire.”  And there are no psychological tests that can detect an animal abuser.

Third, animal abuse is way too common to be explained away by mental illness.  In a national study commissioned by the Humane Society of the United States in 2004, 14% of respondents had witnessed animal cruelty. Assuming only one observed event per household, if we project that estimate to the entire population, that’s more than 15 million incidents annually – that’s an awful lot of crazy people! And finally, saying animal abusers – like rapists – are sick or crazy provides them with an excuse for their behavior, and thereby lets them off the hook. If they were sick, then theoretically they couldn’t help it, and therefore, aren’t responsible for their behavior.  I don’t think any of us would support that kind of reasoning.

So we must move beyond individual-level, psychopathological explanations and examine social and cultural factors that contribute to animal cruelty. Animal abuse is unquestionably a social phenomenon, always occurring in the context of human relationships. Whether animals are being threatened or harmed  by batterers to control their female partners; by children who themselves are victims of abuse by parents; or by male teens who are trying to prove their manhood, impress their peers, or express their anger at social or personal rejection – animal cruelty inevitably involves, and reveals much about, our relationships with other humans.

What are some of these social factors? The most consistent variable that predicts animal abuse is the same one that predicts virtually all violence – gender. Animal abuse is overwhelmingly committed by males. That’s not to say the females don’t abuse animals; of course, they do. In fact, three-fourths of hoarders are women. But the vast majority of animal cruelty is committed by males.

A second predictor is age. When looking at official cases, most animal abusers – again, like most other violent criminals – are either adolescents or young adults, with the average age somewhere around 30. And age is also related to the nature of abuse and the type of animal harmed. It’s more likely that adult males will commit animal abuse alone for instrumental means – e.g., shooting a neighbor’s dog that’s a nuisance. A teenager, on the other hand, is more likely to abuse an animal in the presence of others for expressive reasons – e.g., torturing a cat to in order to demonstrate his masculinity.

As with most other forms of violence, growing up in a violent home is related to committing animal abuse. It is not unusual for animal abusers to have been victimized themselves, to have been exposed to parental violence, or to have witnessed family members or peers harm animals. And one of the stronger predictors of children’s animal abuse is being bullied or a being a bully.

Beyond these factors, humans have superior status over animals in every way – physically, socially, and legally.  Perpetrators are bigger and stronger than their victims, and typically target safe, weak animals. And humans determine the social norms and laws, which includes defining animals’ status as property.  So the rights of property owners will always trump the rights of property, making animal abuse likely.

In addition, the organization of our social institutions makes animal abuse possible. Although most companion animals are considered “family,” that status unfortunately puts them at risk for abuse. And the structure of the criminal justice system – with weak laws that are laxly enforced,  and offenses that are often not aggressively prosecuted and that rarely result in convictions or meaningful sentences – makes animal cruelty a low-risk crime.

Finally, cultural norms and attitudes contribute to the occurrence of animal abuse.  We have incredibly inconsistent attitudes toward other animals – spending $50 billion last year on our pets on the one hand, and killing 10 billion a year for food on the other. Philosophical and religious traditions that see humans as superior to animals because they can’t reason or talk, or lack souls and that give us “dominion” over other animals help to justify their use and abuse.

So what does this mean for reducing animal cruelty? It means taking animal abuse seriously as a society – working for stronger laws and tougher sentences for abusers.  It means elevating animals’ status in the law, because as long as companion animals are recognized as property and not persons, as furniture and not family, their abuse will likely continue with minimal consequences.  It means taking children’s animal abuse seriously and not dismissing it as just an example of “boys being boys.”  It means seeing the interconnections between and working to end all types of violence (e.g., battered women whose pets are also abused).  Locally, it could be something as simple as fostering the pet of a battered woman, or writing prosecutors and judges demanding justice for victims of animal cruelty. There is much to be done. Let’s get to work!

P.S. Does advocating a sociological approach to understanding and responding to animal abuse mean I don’t want convicted offenders – especially juveniles – to be required to receive psychological counseling? Of course not! What do you think I am – crazy?

Clif Flynn, PhD is Professor of Sociology and Chair of the Department of Sociology, Criminal Justice, and Women’s Studies at the University of South Carolina Upstate. He is a past Chair of the Section on Animals and Society of the American Sociological Association. Dr. Flynn serves on the editorial boards of both Society & Animals and the Journal of Animal Ethics, and served from 2005-2010 on the editorial board of Anthrozoös.  In 2008, he was selected as a Fellow of the Oxford Centre for Animal Ethics. Dr. Flynn is also a Fellow of the Institute for Human-Animal Connection at the University of Denver’s Graduate School of Social Work. His Animals and Society course was chosen as the “Best New Animals and Society Course” by the Humane Society of the United States in 2001. Dr. Flynn has published numerous articles and chapters on animal abuse and its relationship to human violence. He is also the editor of Social Creatures, one of the first anthologies in Human-Animal Studies (Lantern Books, 2008). His most recent book is Understanding Animal Abuse: A Sociological Analysis (Lantern Books, 2012).
Join the conversations!