For over 12 years, I have been volunteering with shelter pets to help them adjust to being in a shelter setting and find a new loving (and hopefully permanent) home. The one aspect that has not changed over the years are the various reasons why people surrender their pet to a shelter: Moving, new baby, new spouse, newer pet, financial difficulties, and most often because the pet is showing signs of aging or medical decline. Or some people just say that they don’t want the pet anymore.

On the other hand, I have met people who have gone through all of those life-changing events listed above and they kept all of their pets. When I ask them why, their response is simple and clear: They are family.

So what is the difference between someone who moves overseas and takes her cat, and someone who moves to the next city to inhabit an apartment that does not accept pets (where that person chose, was not forced, to select that apartment)? It’s called the human-animal bond.

This issue has been weighing heavily on my mind recently because I’m seeing far too many cats where I volunteer being surrendered. And while I care more about the pet who is suffering the trauma of losing a home, more than I care about the person who abandoned their pet, I think it’s important that we do more to instill the human-animal bond in people. It’s humans who are dropping the ball on this, not pets. It’s human who treat most everything in their life as disposable, including pets. We need to end this trend because it’s a matter of life or death.

When pets are abandoned at a shelter, they can suffer fright, trauma, grief, loneliness, heartache, and actually have a will to die. I have seen it time and time again, especially with cats over the age of 4,  and have offered energy healing and TLC to help them hang on until a proper home can be found. I have even fostered many cats like this and have actually witnessed the grieving process. I am currently spending time with two brothers, Cowboy and Raider, whose family moved to the Middle East. For over a week, these two boys have huddled together in a cage filled with terror. They don’t realize that they are in a safe place and will have all the time in the world to find a home together. They are two of the lucky ones to end up in a safe place; but they just know that they lost their home and their family.

I try so hard not to judge others because I am not walking in their shoes. I also would rather have these people surrender their pet to a shelter rather than abandon them outside or lock them in a location without food or water. I agree that times are tough for some people, I know that people are stressed and uncertain about the future, but I also know people who have recently lost their jobs, have mortgages to pay, and would never fathom giving up their pets.

Research has documented that pets can lower our blood pressure, keep us healthier, help us recover faster after an illness or surgery, and help ward off depression. Yet when life gets a little challenging, these miracle workers are tossed out like trash. For me, when I’ve had tough times, it was solely my cats that got me through it. We all know that people are becoming more disconnected because of technology, and pets are also getting caught in that cross fire as people are more bonded to their smart phones than their pets.

So let’s imagine a day where family pets are not surrendered to shelters? Not only would that drastically slash the annual euthanize rate of over 4 million pets, but I believe we would enjoy a more compassionate, and less selfish, society. So what do we do to help people bond to their pets? If you work or volunteer at a shelter (or if you are thinking about adopting), here are some ideas to think about when adopting pets:

• Spend time with the new adopter to fully educate them on the cost of having a pet, current medical/behavioral issues, and potential issues that may arise with age. Do not ever hide the issues of a pet because that will surely result in the return of the pet for being misled. And just know that there is someone out there for every pet, no matter what the issue; I’ve witnessed those adoptions countless times!

• Ask in the adoption application what the adopter would do in certain life-changing situations so that you can begin to educate them up front about keeping the pet. Promote the human-animal bond during the adoption process.

• Educate adopters that an adoption is for life. Have adopters sign an adoption contract that states that this is a life-long adoption. Tell them what you have seen in pets who lose their homes, especially elderly pets, and that some become so despondent that they stop eating and lose their will to live. Impress upon the adopter that they are taking home a living, breathing being who has feelings and will bond to them, and they need to do the same.

• Provide follow up care and advice to adopters who may simply need to ask a question regarding a health or behavioral problem. Check in several times in the 6 months after an adoption to ward off any issues and answer questions. Providing these help lines may prevent a pet from being surrendered out of frustration or lack of knowledge.

• Place helpful information about how to resolve health and behavioral issues on your organization’s website.

• Be there for adopters before the human-animal bond breaks. A little effort up front and throughout the process can result in the pet staying at home.

For everyone who works or volunteers with shelter pets, taking these simple steps will help to instill the human-animal bond in adopters. The more we do this, the fewer animals surrendered to shelters we will see.

I’d love to hear your ideas on how we can establish a stronger human-animal bond between people and their pets, so please speak up (woof … meow)! 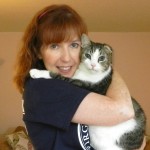